On Saturday, around 100 demonstrators walked through downtown Seoul in protest of the killing of George Floyd by a Minneapolis police officer in what was perhaps the first showing of solidarity with the Black Lives Matter movement in the nation.

Protesters in Seoul, South Korea, rallied in support of the Black Lives Matter Movement on June 6, 2020.

Calls for racial justice in the US are compelling some South Koreans to point out xenophobia in their own country and reexamine decades-old tensions between black and Korean communities.

On Saturday, around 100 demonstrators walked through downtown Seoul in protest of the killing of George Floyd by a Minneapolis police officer in what was perhaps the first public showing of solidarity with the Black Lives Matter movement in the nation.

Marchers held signs in Korean and English with slogans denouncing racial discrimination while some of the event’s expat participants chanted, “No justice, no peace.”

Related: US may be violating international law in its response to protesters, UN expert says

Even though South Korea is largely ethnically homogenous, it has a growing and diverse immigrant community. And as that population increases, some worry that widely held suspicion toward foreigners could incite the kinds of abuse seen in other, more multicultural parts of the world.

“Racism happens here in Korea. Whether they are from China, black or other immigrant workers, they are mocked and looked down on.”

“Racism happens here in Korea,” said Shim Ji-hoon, who organized the weekend protest. “Whether they are from China, black or other immigrant workers, they are mocked and looked down on.”

Speaking to the crowd over loudspeakers, Shim says he worries that if these concerns aren’t addressed soon, “what happened to George Floyd could happen here, too.”

Demonstrations across America, as well as in cities such as London, Paris and Sydney, have highlighted the injustice felt by many black or other minority communities in those countries. But for many South Koreans, the protests and reports of coinciding violence and vandalism echo previous unrest that put the African American community at odds with the Korean diaspora in the US.

Resentment held by some Koreans toward black Americans can be traced back to the 1992 Los Angeles riots, which erupted following the police beating of Rodney King and the subsequent acquittal of the officers involved in the incident, some observers say.

Michael Hurt, who lectures on cultural theory at the Korea National University of Arts, says during that time, many South Koreans watched lopsided television news reports about the damage inflicted on Korean American business owners in LA without much discussion of the underlying causes of the riots.

“Back then, Korean media tended to be much more ethno-nationalist. The news tended to heavily lean on how does this affect Koreans who own businesses that were destroyed.”

“Back then, Korean media tended to be much more ethno-nationalist,” he said. “The news tended to heavily lean on how does this affect Koreans who own businesses that were destroyed.”

Hurt explains Korean reporters omitted the views of African Americans in their coverage.

“You might want to interview a black person, but that didn’t happen in ’92,” he said. 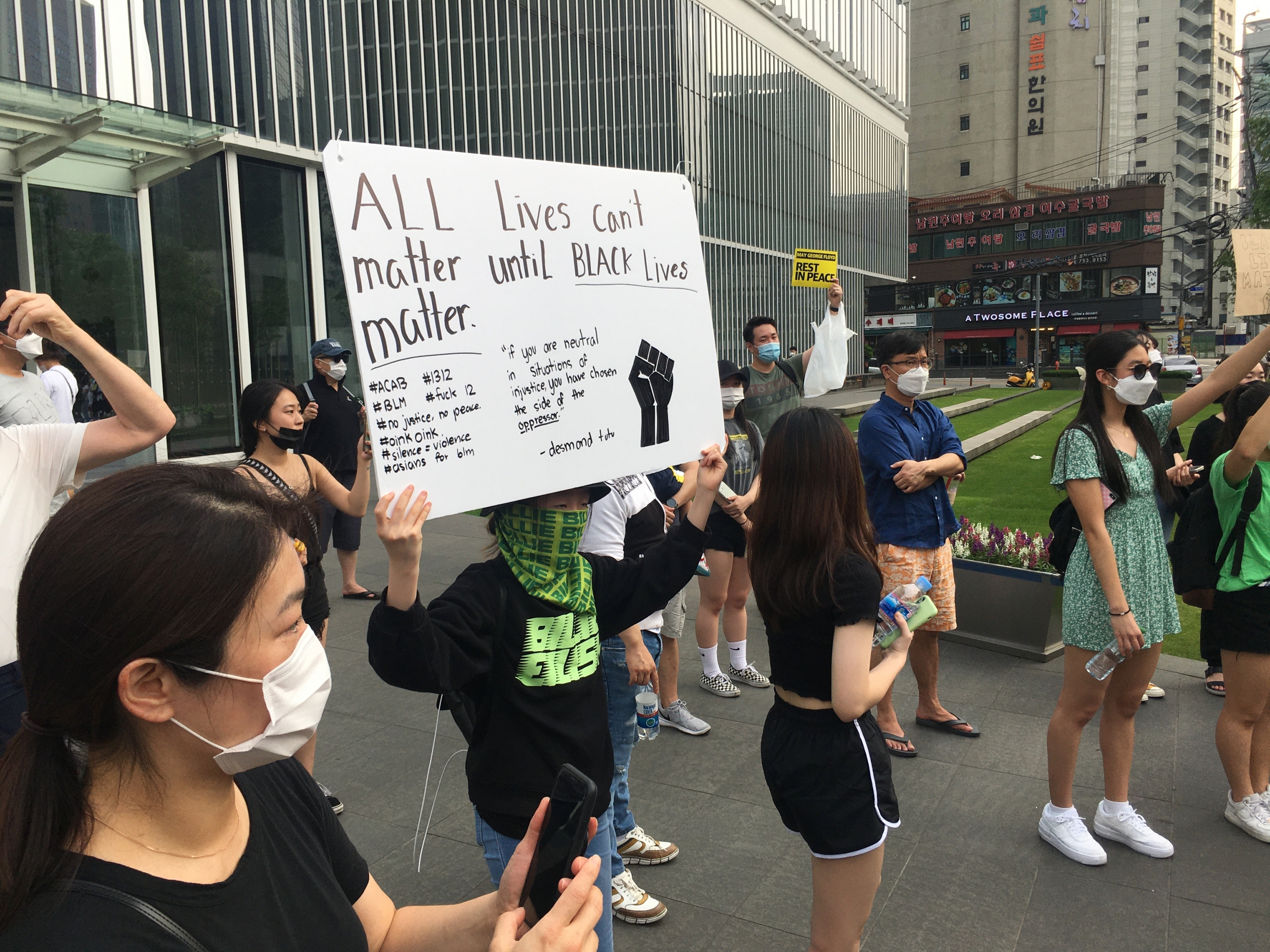 A demonstration in Seoul called out racial injustice in the US and xenophobia in South Korea, June 6, 2020.

South Korean media still report on how the present-day demonstrations impact Korean-owned businesses in the US.

But Hurt says, unlike coverage from nearly 30 years ago, journalists now are offering more context in their dispatches from US cities and doing an overall better job explaining the history of American racism for Korean audiences.

And because South Koreans now consume more media from around the world, Hurt says they’ve been made more aware of black culture and social justice issues.

“There’s a broader exposure and a more sympathetic view these days,” he said.

Despite these advancements, some watchdog agencies say more improvements are needed to reduce prejudice toward all minorities in South Korea.

A survey released earlier this year by the National Human Rights Commission of Korea found that seven out of 10 foreign residents say they have experienced some form of discrimination. And in a 2018 report, the UN Committee on the Elimination of Racial Discrimination expressed concerns over the safety of asylum-seekers, marriage migrants and immigrant laborers living in South Korea.

In light of the ongoing racial justice protests, some South Koreans are reflecting on what they can do to make a difference.

Lee Sa-rang, who works for an education consultancy that helps college students enter US schools, says it’s time for Koreans “to take a stand.”

“I think Korea, because it’s so homogeneous, it’s easy to stick out if you’re different. Just calling out the elders in my family who make racist remarks” is one small way to fight racism.

Lee Sa-rang, who works for an education consultancy

“I think Korea, because it’s so homogeneous, it’s easy to stick out if you’re different,” the 32-year-old said, adding, “Just calling out the elders in my family who make racist remarks” is one small way she has found that she can fight racism.

Ko Na-eun, a 17-year-old high school student, says she and a friend plan to open a booth in Seoul to provide information about George Floyd and the Black Lives Matter movement.

“If they [Koreans] are more aware of what’s happening in the US, I feel like it would help them reflect on what they’ve done in the past when they saw foreigners in Korea,” she said.

Ko, who returned to Korea this year after her Connecticut boarding school was closed due to the coronavirus, says some Koreans have prejudices too, and some don’t understand why they should care about the racism experienced by African Americans.

But protesters in the US have found an unexpected ally in South Korea: K-pop superstars.

We stand against racial discrimination.
We condemn violence.
You, I and we all have the right to be respected. We will stand together.#BlackLivesMatter

BTS has also donated $1 million to help BLM demonstrators and called on fans to match the group’s contribution.

“With a lot of Korean music artists, there’s a deeper respect of the importance and impact that black culture has had on not only their personal but professional lives.”

“With a lot of Korean music artists, there’s a deeper respect of the importance and impact that black culture has had on not only their personal but professional lives,” Cho said.

K-pop fans from across the globe have also hijacked racist hashtags on Twitter by overwhelming these threads with videos of their favorite performers.

Rianne, a 25-year-old protester who only wanted her first name used, joined Saturday’s demonstration in Seoul. She says that as a black woman from California, she has experienced similar forms of racism in Korea as she has in the US, such as people uninvitingly touching her hair.

But she says she gives Koreans a little more leeway for these kinds of acts than she would for people back home because of the two countries’ very different histories.

She says she was very happy to see so many people expressing concern for African Americans at the rally.

“I am so glad that people came together for this cause,” she said. “It’s not just an American issue; it’s global, and we need to fight together.”