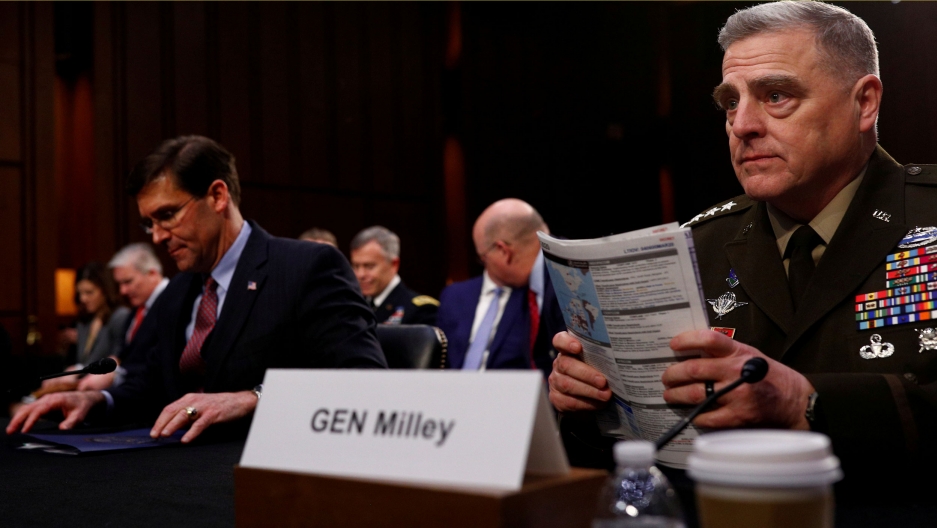 US Chairman of the Joint Chiefs of Staff Gen. Mark A. Milley testifies beside US Defense Secretary Mark Esper before a Senate Armed Services Committee on Capitol Hill, Washington, DC, March 4, 2020.

United States Secretary of Defense Mark Esper and head of the Joint Chiefs of Staff Gen. Mark Milley have so far refused to testify before a House panel about President Donald Trump’s interest in deploying active duty military troops to quell protests.

US President Donald Trump told his advisers at one point in the past week that he wanted 10,000 troops to deploy to the Washington, DC, area to halt civil unrest over the police killing of George Floyd, a black man in Minneapolis, according to a senior US official.

The account of Trump’s demand during a heated Oval Office conversation last Monday shows how close the president may have come to fulfilling his threat to deploy active-duty troops in US cities — despite opposition from Pentagon leadership.

At the meeting, Esper, Milley, and Attorney General William Barr recommended against such a deployment, the official said, speaking on condition of anonymity. The meeting was “contentious,” the official added.

This week the House Armed Services Committee had been hoping to hear from Esper and Milley, but they have refused to appear before the panel.

James Stavridis, a retired Navy admiral and former NATO Supreme Allied Commander said he’s “quite surprised they are refusing to go and testify.”

“I think it’s a significant misstep by the Department of Defense,” Stavridis told The World. “Throughout my time as a senior military officer, I testified in front of Congress on many occasions. Didn’t always want to go and do that; it can be uncomfortable, but it’s a fundamental right of the American people to hear from senior military leadership. That’s the role.”

Related: US may be violating international law in its response to protesters, UN expert says 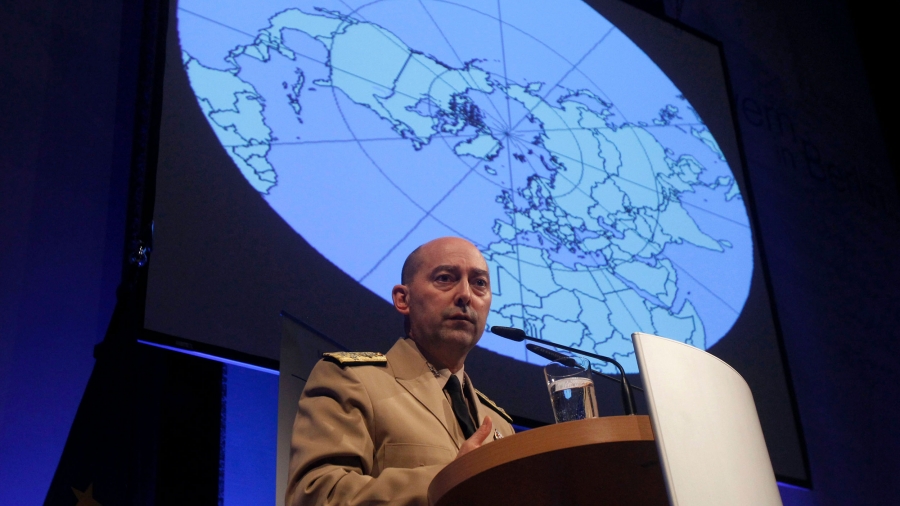 Stavridis spoke with The World’s Marco Werman about whether US military leaders will defy the US constitution.

Marco Werman: What does that tell us about the moment we’re living in?

Adm. James Stavridis: Last Monday, as we all know, we saw demonstrations, largely peaceful, that were stopped in order to provide a photo op for President Trump. The military got pulled into participating in that. That’s obviously what the Congress wants to hear about. I’d like to know more about the facts of that case. It bespeaks an attempt on the part of the administration to politicize the military that is unwarranted and I think, frankly, dangerous.

Well, to that point, we learned this weekend that President Trump demanded that 10,000 active-duty troops be ordered into American streets at the height of the recent protests. That’s according to a senior defense official. What would that have looked like across the nation?

Well, it would have been a terrible moment for the country. And I’ll tell you, Marco, as both NATO commander and previously as commander US Southern Command, in charge of all military activity south of the United States, I would often talk to government officials and senior military officials in other countries about how inappropriate it is to use the armed military against protesters. I never thought I’d be in a position of criticizing that here in our own country.

In the end, Sec. Esper rebuffed President Trump’s threat to deploy soldiers. Gen. Milley declared that US armed forces would not allow themselves to be used against nonviolent protesters. In making those statements, were Esper and Mille publicly daring the president to fire them?

I wouldn’t use the word dare, but I think that they are doing their job. Ultimately, of course, they may have to take dramatic action, but I think they wanted to make this public so that if they do end up resigning, there’s a track record going back to the beginning of the controversy.

So, if Esper and Milley went that far with these comments, why not appear before the Armed Services Committee?

Good question. You’d have to address that to the two of them. I am hopeful, and occasionally we see this, that there’s a kind of negotiation between a congressional committee and some branch of the executive department about what will be discussed, what’s classified, what is in the realm of advice given directly to the president. So, perhaps there is a conversation like that unfolding.

Sen. Tom Cotton wrote in The New York Times in support of putting federal troops in the streets to stop protests, which was an opinion so out there that the editor of the Times who let that op-ed through resigned. Why, Admiral, if you see the existentially troublesome side of that proposition, why are there American lawmakers supporting it?

It’s hard for me to gauge that. And let’s just for a moment, do the numbers here. We’ve got over a million sworn law enforcement officers in the United States. We have 500,000 members of the National Guard who are trained, who are citizen soldiers, who know how to back up police officers. That’s almost 1.5 million people. I see nothing going on in terms of violence or looting or disturbances that would be beyond the reach of that 1.5 million force. So, I don’t understand this desire to pull the active-duty military into this.

What are you watching most closely? A decision or shift in position that will tell us about the military’s relationship with the White House right now?

I will look for whether or not the secretary of defense remains in his post. There’ve been conflicting signals in terms of confidence in him. But from what I can see, he is speaking truth to power to the president in terms of recommending no active-duty troop use. So, watch for how long Sec. Esper remains in the job.