Language learning app Duolingo will offer a new Haitian Creole course for English speakers. It’s an opportunity to explore how Haitian Creole can sound and feel: sweet and romantic — but also rebellious.

Ginette Derelus is a cook at Manjay Restaurant at The Citadel near Little Haiti, Miami. Duolingo partnered with Haitian restaurants to promote the new language course. Derelus, a Haitian Bahamian, says she and her Haitian husband teach their three children how to navigate their fluid identities.

Haitian Creole, or Kreyòl Ayisyen, has always been maligned and disrespected by French-language purists, who saw the language in Haiti as an inferior, nonstandardized version of French.

But many Haitian Creole speakers, whose ancestors created the language along with the world’s first Black republic, believe otherwise.

Just turn the speakers up in Haiti, and you'll hear lyrics like these: "I tell you everything in my heart, because I love you. My gut says you’re the one I want." (Mwen di w tout sa k nan kè m paske se ou m renmen. Zantray mwen di m se ou mwen vle.)

Romantic, right? These song lyrics by Haitian singer Daan Junior illustrates the romantic, joyful and soft side of creole. The language also embodies strength and liberation — like the Haitian people's spirit of resilience in the face of colonial oppression and social stigma.

Don't leave it behind, because creole is a language with a revolutionary past. Now, Florida International University linguists have partnered with the language learning app Duolingo to offer a new Haitian Creole course for English speakers — it’s an opportunity to explore how creole can sound and feel: sweet and romantic, but also even rebellious.

The course was inspired by Haitians in the diaspora, especially in the US, who are often disconnected from their heritage language — their families' mother tongue — because of immigration and the pressures of assimilation into the dominant culture. Many of their children, for decades, have had inconsistent exposure to the language in personal, school or professional settings. But the Haitian diaspora is increasing their influence online, with people connecting through their culture, food and politics. And, as a result, there's a newfound interest in Haitian Creole for language learners.

“This is the language that allowed enslaved people to unite and create a nation and stake a claim right after the French Revolution, right after the US revolution, and say all folks have a right to human dignity."

“This is the language that allowed enslaved people to unite and create a nation and stake a claim right after the French Revolution, right after the US revolution, and say all folks have a right to human dignity,” said Nyya Flores Toussaint, a Haitian American linguistics scholar who studied at Florida International University as an undergraduate.

Toussaint worked alongside an FIU professor to create a Haitian Creole curriculum. He then partnered with Duolingo to produce a new course in the language for English speakers. Toussaint said the new course was inspired by Haitians in the diaspora who are searching for ways to reconnect with their culture, with the language of their families and with their ancestors.

“Language not only tells the present story of what we’re saying, but by the words we choose and by the grammar that we have made, it tells a much larger story of who we are," Toussaint said. 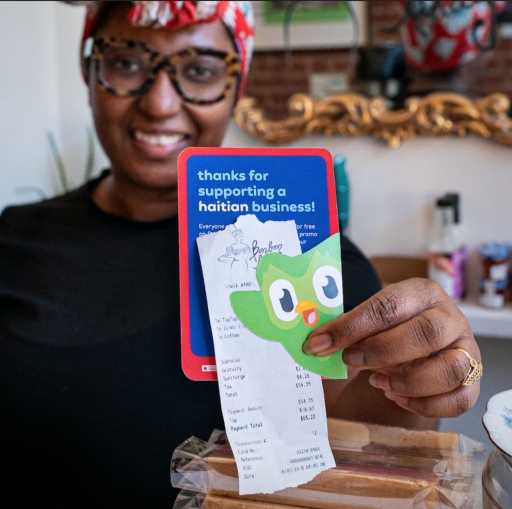 Duolingo partnered with Haitian-run businesses across the county, giving away a free month of the app’s premium subscription service when customers patronize and practice Haitian Creole participating businesses.

For many second- or third-generation Americans, the children and grandchildren of immigrants, that larger story of who we are can get lost. And the connection to the heritage language, and ability to speak it fluently, is often the first to go.

That's true for any immigrant, no matter what language they speak.

“I didn’t have that background because I was born in New Jersey to a Haitian mother and grandmother that had been in New Jersey since 1976,” Toussaint said. “And so, though people in my house spoke creole, creole wasn't taught to us. And so when I got to FIU, I took those few classes. We found Duolingo to be a good, accessible source for us to be able to allow those Haitian Americans to learn their mother tongue.”

Toussaint said the Duolingo course allows English speakers to connect with Haitian values, culture, spirituality, history and language. It includes more than 100 lessons on how to use Haitian Creole vocabulary and abbreviations, differences in grammar and conjugation and the throat and nasal sounds you make when pronouncing words in Haitian Creole.

“So, you won't have to conjugate, which is something that's really hard for me in Spanish, having to conjugate verbs,” Toussaint said. “You will not have to do that no matter who you're talking about. It's always the same verb.”

Cindy Blanco, a senior learning scientist at Duolingo, researches how learners learn on the app. One way to make lessons engaging is to make them like a game.

“It doesn't have to be the case that language learning is kind of sitting alone in a corner, memorizing verb tables,” Blanco said. “You'll see in the course lots of these gamification features where you do things [that] gradually get harder, you earn more points, you advance down the course doing more and more advanced content and different vocabulary topics. You know, language learning should be fun.”

Linguists at FIU brought the Haitian Creole expertise, and Duolingo brought the software. Through their partnership, they've created a journey into Haitian culture, customs and sounds.

Duolingo partnered with local Haitian restaurants to promote the new language course, and advertisements at local bus stops urged people to practice their Haitian Creole at those restaurants. 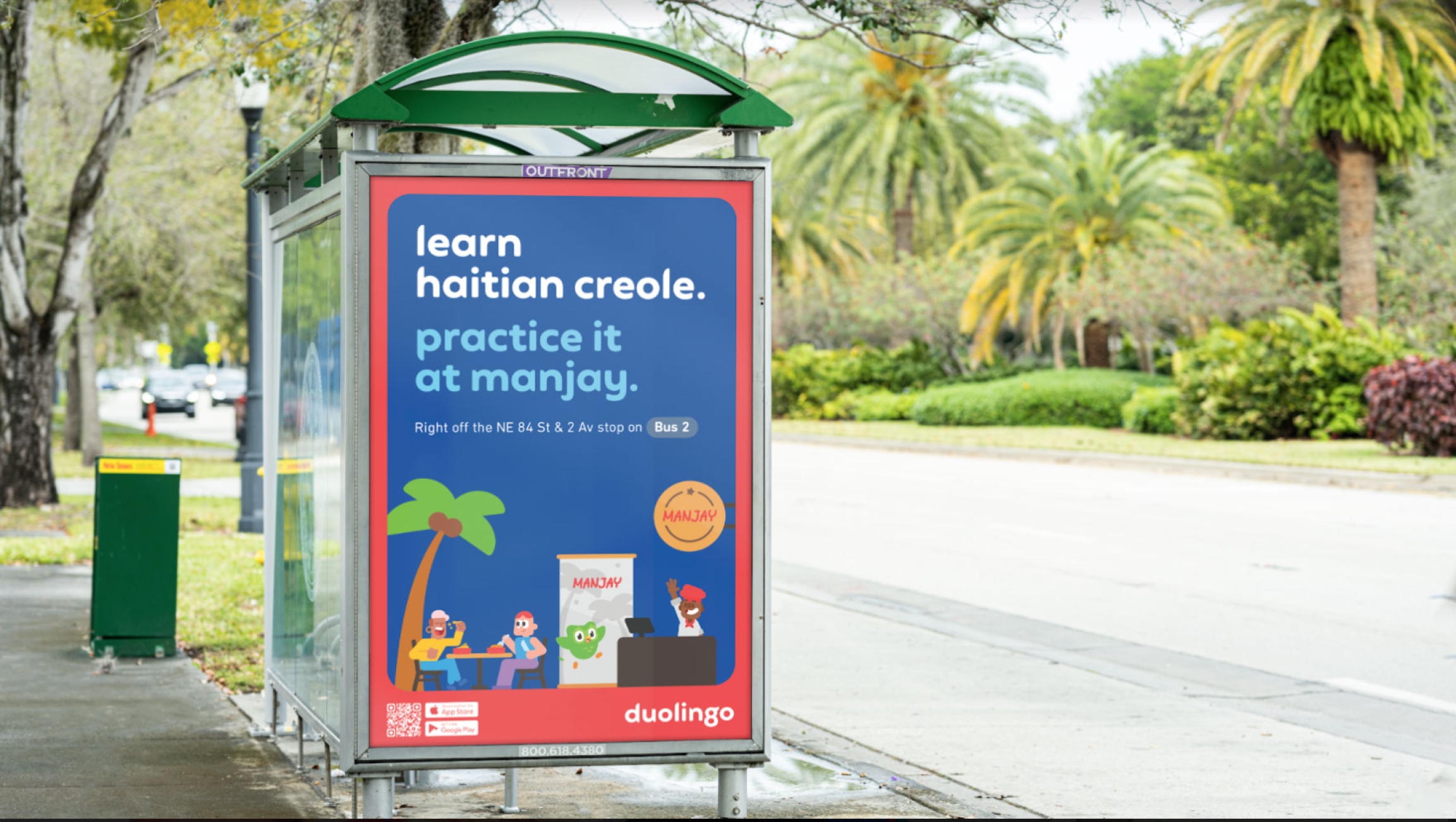 Duolingo partnered with Haitian-run businesses across the county, giving away a free month of the app’s premium subscription service when customers patronize and practice Haitian Creole participating businesses.

“My background is Haitian Bahamian. I was born in the Bahamas. Both of my parents is Haitian,” she said. “Mostly everybody is like, ‘Oh yeah, um, how you speak like that?' I’m like. 'I'm a Bahamian.’ They're like, ‘Oh, I didn't know there are Haitians in the Bahamas.’ Yes, we do.”

At Manjay, I asked Derelus for extra banan peze and pikliz, their fried plantains and a spicy, fermented coleslaw. We spoke English and Haitian Creole. And I noticed that her accent, when she spoke English, sounds a bit different than the accent Haitian immigrants in the US typically have.

“I'm married to a Haitian. I have three kids and they are Haitian Bahamian,” Derelus said. “My dad unfortunately passed away, but that's what I am trying to teach my kids right now, the background of being unique and appreciating your culture.”

The Haitian diaspora expands far beyond the US. The top three languages spoken in the Bahamas, for example, are English, Bahamian Creole and Haitian Creole. A creole language is often derived from a combination of different languages, like French, English, Spanish or Portuguese.

Derelus, whose parents were born in Haiti, said she had to make a strong effort to maintain her cultural and linguistic identity while assimilating into English-speaking countries. She said her father would “make sure she learned creole,” but would also make her use English so that she didn't fall behind.

Nick “Tiko” Andre is a professor of Haitian Creole at Florida International University. His former student, Nyya Tousaint, was the one who helped develop the curriculum for the Duolingo course. Professor Andre said Haitian Creole has its own distinctive grammar system with no gender attached to its pronouns.

Since creole is mostly influenced by French and West African language families near Benin, Andre said it may take time for English speakers to get used to Haitian Creole nasal sounds and word order. For example, “my book” would be “book my” (liv mwen) in Haitian Creole. The possessive pronoun in creole would go after the noun, not before it.

“We have this language that we use because, you know, ‘tout Ayisen pale kreyól,'” Andre said.

“Tout Ayisyen pale kreyòl.” “Every Haitian speaks creole.” His sentiment reminds me of the phrase “Kreyòl pale, Kreyòl konprann,” or “Creole spoken is Creole understood.” That’s a popular expression that highlights a cultural bond among Haitian people. You can feel the bond through Haiti's music genres, such as konpa, rara, rap creole, and twoubadou.

Haitian Creole is one of several Black and Indigenous languages Duolingo is working to make available. Toussaint said that as the language gains popularity, it’s important to never forget its revolutionary roots.

“People have bravely spoken this language under the faith that these listeners would intentionally seek to understand them and that they together could preserve a language that was being created in such a heavy context. A very heavy context,” Toussaint said.

"And that language not only could be preserved, but that it could unite them to make a claim in the world that Black folks, that all folks, deserve human rights and human dignity," he said.

This story originally appeared on WLRN.