A recent UNICEF assessment in Sri Lanka found that many people are skipping meals or eating less to get by. Rising food prices and cooking gas shortages have spurred a Sri Lankan nonprofit to provide hot meals to those in need.

People wait in a queue expecting to buy cooking gas near a distribution center in Colombo, Sri Lanka, July 12, 2022.

In his Colombo office, Moses Akash apologized for the food that had taken over the space — a pan of jackfruit sitting on a desk, bags of rice.

“This was not a planned project,” the energetic 34-year-old said of the community kitchen he’s now running as director of the Voice for Voiceless Foundation.

Since June, the Sri Lankan nonprofit launched 12 sites around the country, serving a hot lunch five days a week to around 1,800 people.

The initiative is a response to Sri Lanka’s economic crisis, which has sent food prices surging 75% and has caused widespread shortages of cooking gas.

Prior to launching the first community kitchen in a Colombo church, Akash said his team was handing out rations, such as rice and milk powder, to people in need.

There’s not a tradition in Sri Lanka, Akash said, of nonprofits regularly providing hot meals to the needy.

But he soon realized that, without cooking gas, people couldn’t prepare the donated food they were receiving at home. He met a single mother with a 2-year-old child, he said, who told him that she’d been eating jackfruit for three days because she had no way of cooking anything.

“So, that is where we realized that giving dry rations is not going to resolve this problem,” Akash said. “Like her, there are a lot of families who are unable to cook.”

Akash explained that the kitchens were originally expected to operate only through the end of the month, but that their run has now been extended through at least October.

“We don’t see the light at the end of the tunnel,” Akash said. “We are sinking further down.”

“We don’t see the light at the end of the tunnel,” Akash said. “We are sinking further down.”

Sri Lanka defaulted on its debt in May, and has run out of money for essential imports, including gasoline, medicine and cooking fuel.

People switched to cooking over firewood, but that’s now hard to find in Colombo.

On a recent afternoon, Akash oversaw the serving line while volunteers ladled out rice and four different types of curry to more than 300 guests, many of whom found themselves seeking a free hot meal for the first time this year. 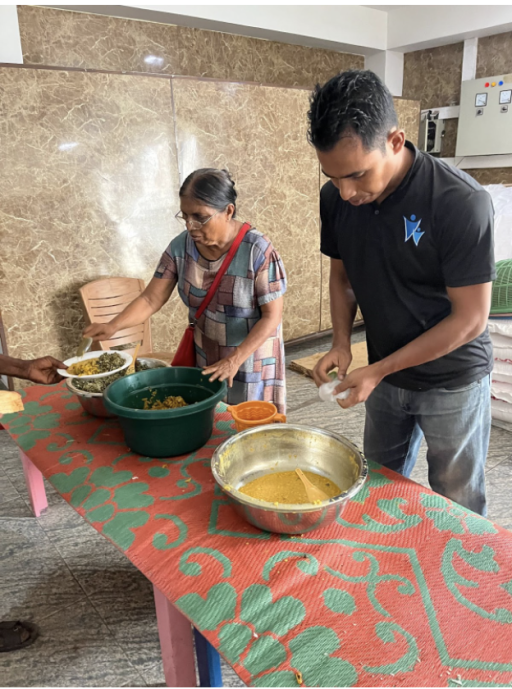 Moses Akash, director of Voice for Voiceless foundation, serves up the last lunch offerings at a community kitchen in Colombo alongside volunteer Irani Kalawa Devage.

Wasanthi Hereth was squeezed into a crowded row of chairs, feeding her 3-year-old son. She said she had food at home, but no cooking gas to prepare it with.

“I’ll make an evening meal at home with a wood fire,” she said through an interpreter.

Another visitor, Suneetha Ihinge, said with food prices increasing, the roughly $6 a day she makes as a maid is only enough to pay for one daily meal for her husband and herself.

A recent UNICEF assessment in Sri Lanka found that many people are skipping meals or eating less to get by.

Seven out of 10 families reported cutting down on food consumption, according to spokesperson Bismarck Swangin.

Malnutrition in children was already high in Sri Lanka before the economic crisis began, and they’ve become particularly at-risk now during the crisis.

Sri Lankan schools have also stopped offering free lunches to students, which both increases the risk of children going hungry and reduces the incentive for them to go to school, Swangin said.

UNICEF has been raising funds to treat 56,000 kids for malnutrition, and estimates that half the children in Sri Lanka need some sort of humanitarian assistance.

“We are seeing a crisis not like any other,” Swangin said. “Here, you have Sri Lanka, a progressive, stable country. But unfortunately, we are having to talk about more or less the same type of issues that you would talk about in a conflict country.”

Even at the community kitchen in Colombo, the food is cooked over a wood fire on the building’s roof, because of the cooking gas shortage.

But Akash said his foundation is now partnering with supermarkets to use their leftover vegetables, and distributing seed and fertilizer to its community kitchens around the country so that they can start growing their own produce.

“I don’t know how long people will be able to donate with this crisis, because it is a challenge for them also,” Akash said.